known to the locals as Lake Toho, also referred to as Tohopeka, West Lake or just Toho.
Florida 22,700 acres

This world-famous lake is renowned for producing more big bass than any other lake in the country. One of the most consistent lakes in Florida, Lake Toho continues to produce not only trophy fish, but impressive limits of Florida largemouth. 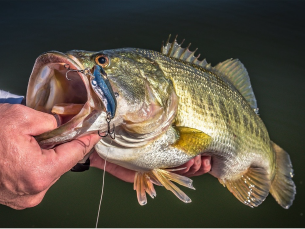 Anglers targeting trophy largemouth bass may want to concentrate their time around the mouth of Shingle Creek, enhanced shorelines east and west of South Port Park, Lanier Point, Goblets Cove and Brown’s Point. Both live and artificial baits are effective. Golden shiners are the live bait of choice for most anglers, although spinnerbaits (white, white/chartreuse or yellow-skirted), lip-less crank baits and plastic worms will account for fair share of catches. The lake’s north shore has a lot of tall grasses that often conceal large bass populations ready to bite.

Live bait (crickets and red wigglers) will be the bait of choice for many bluegill anglers, but small artificial rigs will also be successful.

While winter is widely known as the best time to catch trophy bass, it is the summer when nearly all the record-sized bass are caught. Most of the bass population in Lake Tohopekaliga like to spawn in February and March before moving away from shallow areas and into the Kissimmee grass or hydrilla through the lake. Excellent summer fishing spots include Big Grassy, Brown’s Point and Lanier Point.

If the target is black crappie, February is the best time on Canoe Creek in Lake Cypree or Southport Canal.

Typically, from May to June, bluegill, redear sunfish and chair pickerel are active. Anglers targeting these fish should try to schedule time on the water around the new and complete moon phases and concentrate their efforts in areas with sandy bottoms associated with vegetation, including Brown’s Point and North Steer Beach.