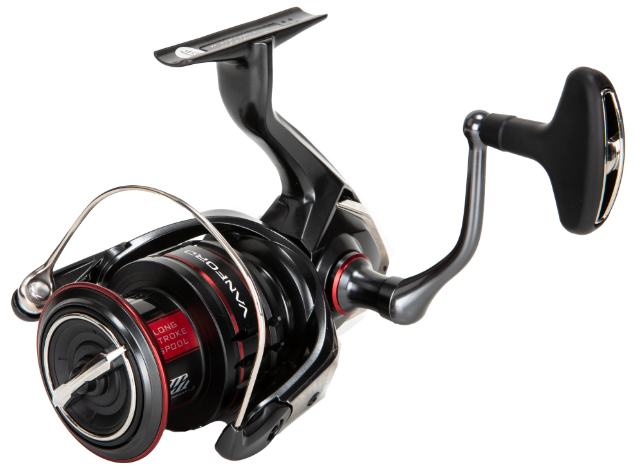 The Vanford is one of the newer spinning reels from Shimano and builds from the success of the Stradic series of reels. The Vanford shares many similarities to its predecessor, the Stradic CI4 in terms of body and core design. With a commonly found price point in stores and online of just under $229 the reel is a premium buy for sure and one that offers great performance and flexibility for different types of fishing. 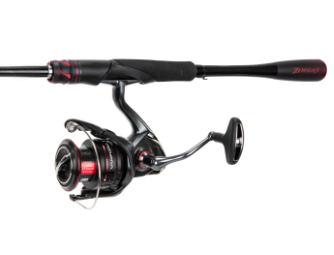 Operates smoothly and appears to be well built, dependable, and durable as expected

One of the most impressive features is the weight of this reel (or lack thereof). It’s extremely light and Shimano has done something impressive with this reel. In our tests the Vanford weighed in at 8.02oz WITH line added.

Unlike other reels on the market featuring graphite construction that feel and look cheap, the Vanford has clean lines but feels sturdy and is tough.

With a higher end price tag of $229 it’s an product that is clearly targeted at the more advanced angler and one with deeper pockets. It may, or may not, be the best buy for the average angler and in this case may need to be considered more closely for exactly what the average angler is really getting for the price.

The reel has a completely removable handle and without ability to partially collapse the handle for storage.

Baitstick gives the Vanford a thumbs up. That being said, the high price point makes the reel a product that may not make the most sense for anglers looking for more affordability or a different mix of price and value. For sure, there are lots of reels on the market that deliver considerable quality and performance for less money. But for those anglers looking to step up to the Shimano Vanford there should be little disappointment in the great quality and performance an angler would be paying for the reel.

Read if you have more time….

After researching the Vanford at different retailers online and in stores and paying undiscounted MSRP for the product, Baitstick followed the same experience as any typical angler getting a look at the reel for the first time, starting with the packaging and box itself.

Shimano shipped its product in a sturdy cardboard box which helps support the impression of quality for the price being paid at the register. The great first impression was backed by seeing the interior of the Shimano Vanford box lined with form-cut cardboard inserts that were fitted to the reel and protected the reel from sliding inside the box. Also inside the product packaging box were the printed reel manual, parts diagrams, extra washers to create “winding shape”. No oil, no reel case or protective bag, and no extra spool were included in the retail box purchased by Baitstick.

The eventual removal of the reel from the box emphasized one of the biggest features of the Shimano reel, it’s lightness. It is noticeably lighter than other reels on the market.

From there, it was a matter of tightening drag on the reel, adding line, and attaching the reel handle in order to take it on the water.

In testing the Vanford, the reel was put through its paces with a casting performance assessment. For improved casting performance, Shimano took a new step and increased the height of the spool, elongating the area of the spool for holding line with the goal of increasing casting distance while producing a smoother line lay on the spool during retrieval. Shimano gives this change much coverage in its promotion of the Vanford and it’s an interesting change to the Shimano spool design. In Baitstick’s field testing of the reel there was not necessarily a dramatically noticed change in casting difference but the line control on retrieve was excellent. 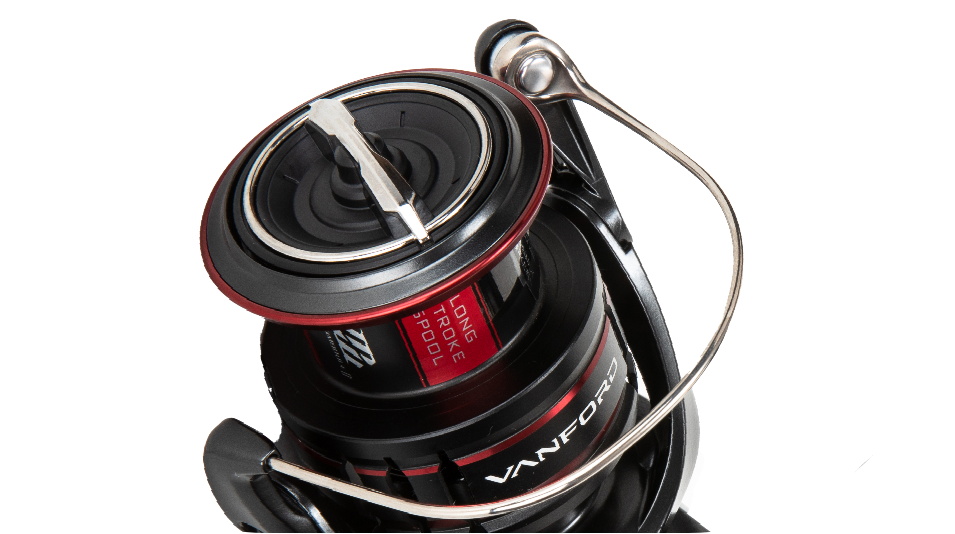 The Vanford had noticeable smoothness in the movement of the reel during the retrieval assessment. With any new reel this is not necessarily surprising but the 10 bearing design of the Vanford was still noticeable and noteworthy. In addition, the reel has a comfortable handle design. The lightweight design is easy to hold and is optimal for extended days of fish on the water.

Shimano highlights the use of carbon material in the drag of the Vanford and the increased range of drag settings with improved smoothness of operation. In Baitstick’s own field testing of the product, the drag was easy to adjust and the drag overall operated very smoothly.

The Vanford in Comparison to the Stradic CI4

There is no question that the Vanford is a quality reel for any angler. Still, there remains a lingering feeling with the Vanford on why the change and the break from the Stradic line of reels. As if to emphasize the move in the new direction with the Vanford, Shimano heralds its new release by writing, “A legend is born.” Shimano also claims: “Sculpted from over a decade of engineering advancement and a rich lineage of predecessors”

Time will tell whether the Vanford has the endurance and stamina of its predecessors, particularly the CI4. And while Baitstick recommends taking a close look at the Vanford if an angler is in the market for a new high end reel, there is also reason to question whether the Vanford is enough of a newly born “legend” to replace an existing CI4.

The Vanford shares all of the following product features with the Stradic CI4, looking from the outside first and then taking a look under the hood of both reel designs . . .

One piece bail – Shimano designed its current generation of reels in both product families to reduce ontact and friction of line to the line roller, reducing risk of tangles (good for not wasting precious time on the water…) and wear to the bail arm (good for having products that last enabling more time on the water…)

MGL Rotor – Shimano’s effort to design the reel rotor for lightness, smoothness, balance, and needing less effort overall exerted by angler. (good ergonomic function meant to have the product demand less of the angler and hopefully extending anglers day on the water…)

Waterproof drag – A feature meant to better seal the drag system on the Stradic and CI4 and Vanford with improved rubber gaskets to keep out water, dirt, sand, or salt (stuff that reels don’t appreciate and that reduce the life of the reel). While this is a very well intended feature and one that is always needed in any reel, the use of the term “waterproof” by Shimano is possibly problematic here. Any product that is taken out on the water repeatedly by an angler of any level and somehow ends up in or around the water enough times will likely over time cease to be waterproof.

AeroWrap II – As line is retrieved onto spool it is layered onto the spool in a criss-cross pattern onto the spool, helping reduce friction in line during for longer casts. The worm gear design also moves the spool upward quickly and slowly on down motion during retrieval to keep line wound in a consistent pattern and helping ensure smoothness of the next cast

Free Body – An effort by Shimano to move the overall reel closer to the rod handle section and to bring a closer center of gravity to the combined rod and reel in the hand of angler. This is all part of an attempt to improve ergonomics and to decrease angler fatigue and improve casting performance

Hagane gear – Getting under the hood of the Shimano reels and inside their components Shimano invested in strengthening the materials going into the CI4 and the Vanford. Both reels have a forged drive gear and drive gear teeth to increase strength, smoothness, and durability of overall gear system

S A-RB bearings – The bearings used by Shimano were given additional guards on either side of the bearings to reduce chance of harmful particles to the life of the reel, whether water, dirt, sand, or salt, from collecting near bearings and causing weakened performance or damage and shortened life of bearing components and bearing rotation

X Ship – Staying under the hood of the Stradic and Vanford, Shimano looked to increase gear durability by supporting the internal pinion gear on both ends with bearings, important since the pinion gear keeps core alignment with the drive gear helping keep gear function stable and in place under heavy stress and loads placed on the reel while fishing. In doing this the friction between spool shaft and gear are intended to be reduced and eliminated, leading to improved casting performance and distance through the reel, particularly with lighter lures

The Flexibility of the Vanford

If an angler wanted to go with one reel to handle both fresh and saltwater fishing then this would be an excellent choice given the amount of graphite construction and non-corrosive parts designed and built into the Vanford. Many cheaper reels would be sufficient for heavy freshwater use yet wouldn’t handle long term use in saltwater even with routine cleaning. Still, there are experienced anglers who would think twice about paying $229 for a Vanford and taking it out for inshore fishing regardless of the graphite packed into the reel.

Shimano marketing emphasizes that Vanford is capable of going “from ice fishing and drop-shot fishing for smallies in the sweetwater to stalking tailing fish in the flats”. But Baitstick believes this may be too much of a stretch. Can you ice fish with the Vanford? Yes. But just because you can do things doesn’t mean you should. The Vanford would simply be overkill for ice fishing.

And if a reel is really meant to go from freshwater to saltwater to ice fishing then for the price it does not seem too unrealistic to add an additional spool in the retail box to enable an angler to go fish those extremes.

The concept of one reel covering multiple situations makes sense though the size of reel and rod used for smallies wouldn’t be the same as that used for tailing redfish meaning that multi-species, multi-technique anglers are still going to need multiple set-ups anyway

The Shimano Vanford is a premium spinning reels from Shimano capable of performing at high levels of performance and built with durability in mind. The reel is designed to deliver results and to endure the wear and tear that comes with fishing heavily.

The Vanford has the roots of the Stradic family design behind it and offers great performance and flexibility for different types of fishing. That being said, the high price point makes the reel a product that may not make the most sense for anglers looking for more affordability or a different mix of price and value. But for those anglers looking to add to the top of their reel rotation or anchor it with a workhorse the Vanford is one of the best on the market today.