ICE FISHING FOCUS ON: LAKE OF THE WOODS, MINNESOTA

Discovering Minnesota’s Lake of the Woods

Lake of the Woods is a unique Minnesota fishing destination located at the northernmost region of the contiguous United States. Consisting of nearly 1 million acres, Lake of the Woods is known as “The Walleye Capital of the World” and boasts impressive numbers of walleye, Minnesota’s state fish.

Lake of the Woods (often abbreviated LOTW) was created at the end of the last ice age, and is considered a remnant lake of the vast Lake Agassiz which once covered much of the region. It straddles the U.S./Canada border, and for anglers who love facts and trivia, LOTW separates the Northwest Angle (the northernmost land holdings in the contiguous U.S.) from the rest of Minnesota.

The American section of LOTW waters, which includes most of the southwest portion of the lake, is largely open water with limited bottom topography. The Canadian portions to the north by comparison have deeper water, much more variation in depth, and contain the majority of LOTW’s nearly 14,000 islands.

LOTW is a productive fishery. In addition to walleye, Lake of the Woods supports strong numbers of sauger, northern pike, musky, lake sturgeon, burbot, crappies, and perch. As a result, LOTW is a popular destination for anglers of all levels willing to travel to this unique fishing destination, even in the coldness of winter for ice fishing season.

Ice Fishing on Lake of the Woods

The winter months can be among the most rewarding times of year to visit Lake of the Woods. But fishing LOTW in the depths of winter does not come without certain risks. Ice fishing is often done miles from shore with no land in sight. Accumulating snow levels as winter progresses can often make travel increasingly difficult. As the lake ice expands and contracts over the winter months, the lake often pushes up sheets of ice in sections to create impassable barriers. High winds or common blizzard conditions on the lake can also disorient and quickly leave ice anglers stranded.

For these reasons and others, most people travel on and off the lake on “ice roads,” created and maintained by area resorts and outfitters. These roads built on the lake ice can be more than 20 miles long in some areas, stretching far into the lake. Even if embarking on a DIY adventure to Lake of the Woods, the best policy is to allocate a small amount of money for a pass to one of these roads. Beyond good safety, the ice roads typically lead to good fishing destinations since local fishing-dependent businesses work hard to keep rental fish houses on the good fishing spots and will move them frequently throughout the season. Anglers bringing their own shacks are wise to head toward whichever part of the lake is getting the most attention for the sake of safety and likelihood of hooking fish.

Ice house rentals are heated with holes already drilled into the ice. The houses typically fall into two categories: “day” houses and “sleeper” houses. Day houses are often used by those who stay overnight at nearby resorts. These anglers will typically drive onto the lake in the morning and off again at night. Those who choose sleeper houses bring bedding and provisions, and often stay on the lake for multiple days and nights.

Ice fishing at Lake of the Woods is very friendly to non-anglers and beginners, with local fishing businesses capable of supporting anglers of any level. Rented day houses with warmed heaters and pre-drilled holes in the ice allow visiting anglers to wear comfortable clothes and begin fishing almost immediately. Guides managing full service day houses will typically shuttle anglers to the ice houses, supply bait, give advice, and check in throughout the day. When the day is done, the guide will lead the way off the lake and clean fish for their clients. Since fishing equipment can be rented, anyone with little to no ice fishing background can show up and have nearly a full ice fishing experience. 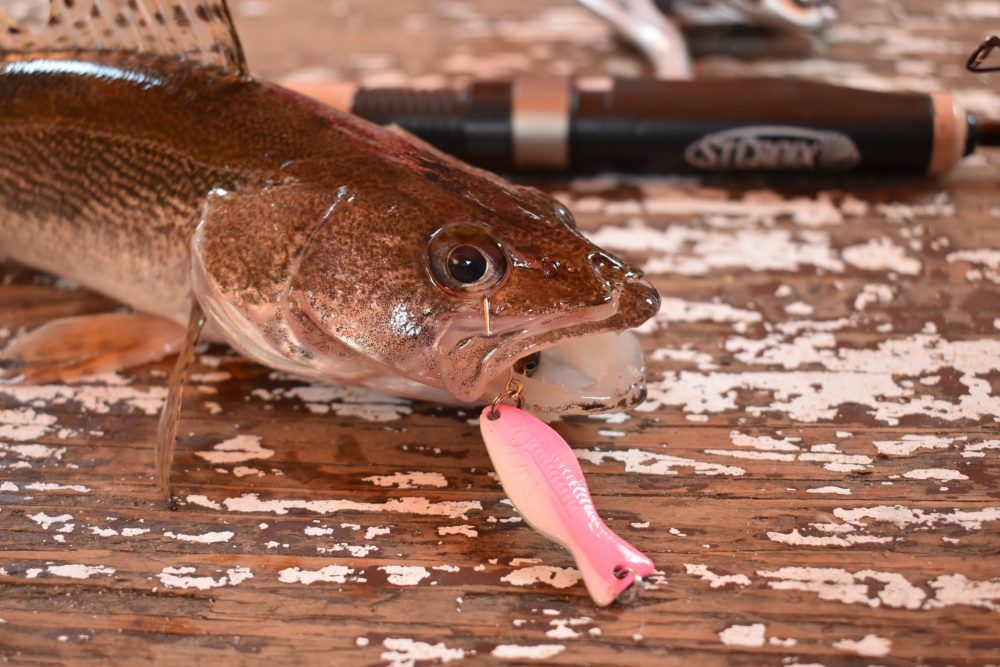 Early Ice Season on Lake of the Woods

Ice fishing season on LOTW often starts around the beginning of December. The first fishing occurs in areas close to shore, including the numerous bays that are quicker to freeze over. Anglers at this time of the season are limited to foot-traffic-only while the ice is only a few inches thick.

The early ice bite can be hot, especially for walleyes. Fish in the early part of the ice fishing season are hungry and aggressive, and the potential for trophy catches is high. While walleye is the main game, it’s often hard to know what is on the other end of the line— pike, burbot (eelpout), and even lake sturgeon are common catches.

December ice fishing on LOTW involves active presentations to trigger bites. Jigging spoons and other lures that flash and make vibrations in the water are popular, usually baited with a minnow head. Classic spoons like Al’s Goldfish, Kastmaster, and Swedish Pimple, in metallic finishes (especially gold) get attention in the lake’s bog-stained waters. Medium and medium-light action rods are good all-around choices for jigging lures with 6 or 8-pound monofilament or braided lines.

Mid-Ice Season on Lake of the Woods

By mid-winter the ice has thickened enough typically to support the weight of vehicles and ice road traffic (always consult local guides and fishing shops for the most current conditions and ice report). As the ice thickens, the fish houses grow in numbers on the lake and tend to herd and migrate miles out into the main lake. When most fisheries hit the mid-winter slump that challenges ice anglers of all abilities, LOTW commonly proves to be the exception. The all-day walleye/sauger bite most often continues, typically providing anglers with steady action.

Packs of walleyes and saugers roam the lake, looking for prey like bloodworms, crayfish, perch, and baitfish. Common places to intersect them are the vast mud flats and offshore reefs, which tend to concentrate feeding fish.

During this period, fish are less eager to bite but can be enticed. Anglers often use smaller lures and those that fall more slowly, to help overcome a more “neutral” bite. Since fish may spend more time eyeing the bait, many advise using lighter lines as well as fluorocarbons, to reduce line visibility.

Also at this time, a technique called “deadsticking” is commonly used. It consists of a live minnow suspended near the bottom, under a rod with a very flexible tip to twitch the line when even light pressure is applied by a biting fish. The tip of the rod also acts like a bobber and can be a visual indicator of bites so light that they would normally go unnoticed. Deadsticking often outperforms jigging at this time of season and can be a valuable technique for anglers of any level.

Late Ice Season on Lake of the Woods

When daily sunlight increases and snowpack on and off the lake begins to melt, some fish move toward spawning areas in shallower waters. Most begin to feed more aggressively. Since fishing activity also heads back toward shore during this time, anglers looking for Walleye typically concentrate near known preferred spawning sites, including bays, rock or rubble shorelines, and rivers. Anglers using rods for walleyes will often revert to larger lures and more active jigging, as in the early part of the ice fishing season. Trophy pike are frequently caught by anglers who target them in shallow waters with tip-ups and large minnows.

While Minnesota’s regular walleye season closes near the end of February, the Lake of the Woods season extends into mid-April. The northern pike season does not close, and resorts typically leave their houses on the ice until the end of March or as conditions allow. 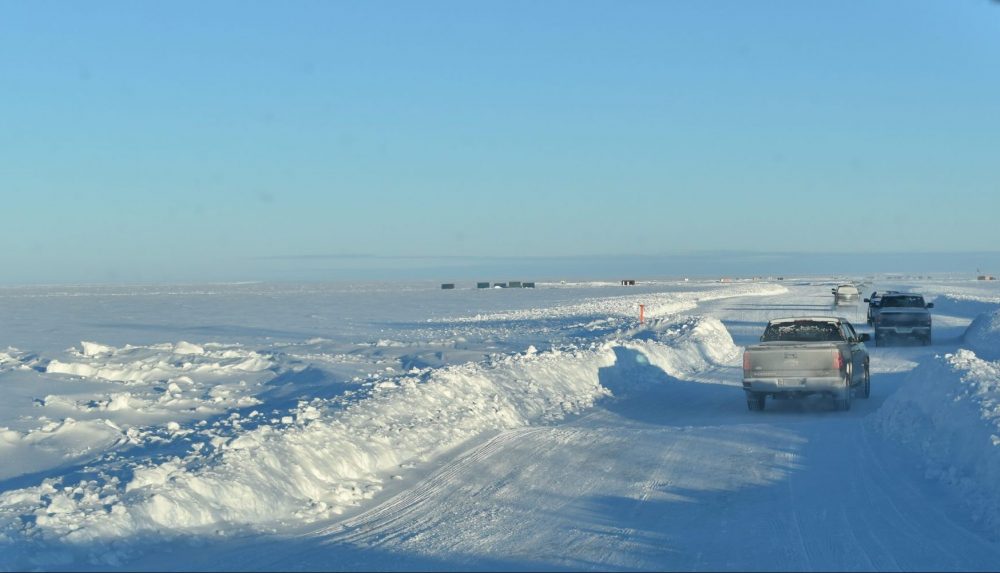 Making the Trip to Lake of the Woods

Anglers should be familiar with Minnesota fishing regulations before traveling to LOTW. As a Canadian border lake, LOTW has many seasons and rules that differ from the rest of the state, including size limits and rules pertaining to specific parts of the lake.

Traffic to Lake of the Woods is generally concentrated on state highway 72 from the south. Baudette, the first major town in the area, is approximately five and a half hours’ drive from the Twin Cities. From there, visitors either go north to destinations along Rainy River and the south shore of the lake, or continue northwest on highway 11. Warroad, which lies in the southwest corner of the lake, is about 36 miles from Baudette. It is also the jumping off point for those who continue the 40 miles through Canada toward the Northwest Angle. Both Warroad and Baudette are good bets for gas and other supplies.

A trip to Lake of the Woods for anglers of any level is best planned in coordination with one of the local fishing guides, shops, or resorts in the region. With the remoteness of the region even within Minnesota and the unpredictable nature of the winter weather, it’s smart to have local knowledge and resources available in case needed unexpectedly. With a plan in place for visiting LOTW, there are even higher chances of catching trophy fish and a trip of a lifetime.