Lake Ray Roberts is located about an hour northwest of Dallas and a short drive northeast of Denton, Texas. The lake is situated on the edge of the DFW Metro Area and is one of the most scenic lakes in the region. Roberts also is known to be less crowded and more ‘family friendly’ compared to some of the other lakes in the area. The fact that it also offers great fishing almost seems like a bonus.

A relatively new lake, Ray Roberts was impounded in 1987 and created by the damming of the Trinity River’s Elm Fork Branch. Covering more than 25,000 acres, the lake is about the same size as most of the lakes in North Texas. But with a maximum depth of 106 feet, it is deeper than many other lakes in the Dallas area. Also, unlike so many other lakes in the DFW area, it is not bordered by cities and suburbs. The closest towns are Pilot Point and Sanger, which have a combined population of around 10,000. The two towns sit on opposite sides of the lake and a few miles from the actual lake itself.

Lake Ray Roberts has a good quality and diverse fishery. The current lake record largemouth bass is 15.18 pounds. The extent of the fishing quality at Roberts was evident during the 2021 Bassmaster Classic when the top eight finishers each had a total bag of more than 40 pounds and the winning total was 50 pounds. In addition to a tremendous number of solid largemouth bass, there are a variety of other species swimming in the waters of Lake Ray Roberts, including smallmouth bass, white bass, blue catfish, channel catfish, crappie, bluegill, sunfish and even walleye.

The amount and type of fish habitat on Lake Ray Roberts is almost as diverse as the range of species swimming in its waters. There is not quite as much aquatic vegetation in the lake as found in most Texas lakes. And what vegetation there is mostly is found on the south end of the lake. But what the lake may lack in vegetation, it makes up for in hard structure. On Lake Ray Roberts, both arms of the upper end of the lake contain a lot of standing timber – over 2,000 acres. There is plenty of rip-rap along the dam and around bridges. The bridge pilings themselves provide additional structure to fish on the lake, as well as miles of rocky shorelines and submerged rocks and boulders in the lake. The lake also has many submerged brush piles, including several piles that were created before the lake was impounded. Additionally, there are countless stumps and laydowns, flooded brush, points, submerged tank and pond dams and a handful of docks creating structure and habitat for fish to favor. 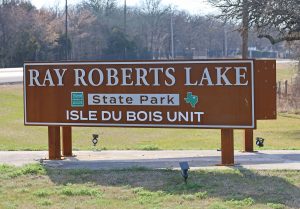 Due to its depth and variety of structure, Ray Roberts is one of those lakes where a fairly extensive lure selection and bag of tricks comes in handy. The many points on the lakeshore can offer reliable fishing throughout the year. In cold months, jigs can perform well around the point areas, while jerkbaits and crankbaits often work well during times of milder temperatures. Shaky Head worms are a good bet in the spring as well. Also, during spring and early summer, umbrella rigs tend to work well around the points.

Carolina- or Texas-rigged plastics typically produce well around offshore structures during summer and winter. In the heat of summer, fish will also often be found around standing timber in 20-25 feet of water, as well as around bridges and over offshore structures that provide shade and/or cooler water. Crankbaits, lipless cranks and soft plastic lures can all produce good catches of bass during this time. Vertical jigging is another good option for fish retreating down to colder water during the summer months. The rip-rap shorelines are good spots to look during periods of cool weather, with jerkbaits, crankbaits, spinnerbaits and plastics all capable of producing well.

During spring most of the fish spawning activity will occur on the flats up the Isle de Bois arm on the north end of the lake. The coves throughout the lake are also generally fairly productive in the fall. As the vegetation comes in, weedless frogs will often draw strikes along the shorelines and over the grass beds.

There are many lake access points for boaters, paddlers and bank anglers to reach quality fishing areas on Lake Ray Roberts. Lake Ray Roberts State Park is maintained as nine different sectional areas or “units”. The Johnson Branch, Isle du Bois, and Jordan park units have boat ramps and campsites. The Jordan Unit is also the location of Lone Star Marina and Lodge, the only marina on the east side of the lake. Isle du Bois is also on the east side of the lake, a few miles south of the marina, and has a fishing pier with lighting and good bank access for fishing. 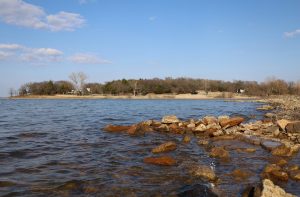 The Johnson Branch Unit is across the lake, occupying a peninsula which juts into the lake from the western shore. Lake Ray Roberts Marina is in the Sanger Unit and on the west side, just outside the city of Sanger. Additionally, there are six satellite units around the lake that offer boat ramps as well. As an added option, there is the Greenbelt Corridor, which begins just below the dam and gives anglers the opportunity to bank fish or launch canoes or kayaks in the Elm Fork Branch of the Trinity River.

Anglers who choose not to fish Lake Ray Roberts on their own will also find plenty of capable guides on the lake. But, whether fishing with a guide or on your own, Lake Ray Roberts is almost guaranteed to deliver an outstanding angling experience.