Less than 100 miles from Minneapolis and near the geographic center of Minnesota, Lake Mille Lacs (French for thousand lakes) is one of the state’s largest lakes covering more than 130,000 acres. The lake was formed during the last ice age when glacial deposits surrounding the lake’s basin trapped water and created a large freshwater impoundment.

For generations, Mille Lacs was referred to as the “Walleye Factory.” Even today, the lake is well known for producing great numbers of hungry walleye year after year. A rich natural food chain in the lake not only still sustains a strong walleye population, but it also supports jumbo perch, tullibees (a member of the whitefish family and important prey fish), and smallmouth bass. And Mille Lacs is also known for producing impressive northern pike and record-setting muskies.

Smallmouth anglers can find fish in most parts of the lake, particularly in and around sections of rocks and boulders. Since crayfish are a main part of the local bass diet, lures that mimic crayfish are often best fished at depths from 2 to more than 25 feet. The lake’s northern pike are typically found in shallow weedy areas. As with pike anywhere, they will bite on most anything but big baits are helpful in catching big fish.

Walleye management has proven difficult in recent years for the state and local tribal entities that manage Mille Lacs jointly. The good news is that there are still lots of walleyes. They can be found throughout the lake, and good chances for trophy catches continue to attract tens of thousands of ice anglers each year.

Mille Lacs is a year round fishing destination and when the first ice appears on the lake some of the best fishing of the year can be found. Ice fishing on Mille Lacs typically begins in December. And the bays protected from wind usually first develop ice safe enough for foot traffic, followed by the more central parts of the main lake as the ice spreads farther from shore. It is common for ice to form, melt or break up in the wind, then form again. Caution is advised, and consulting with bait shops and resorts is helpful and advised when ice is still new.

Most winter angling occurs near shore in the early weeks of the ice fishing season. Walleyes are active and willing to bite at this time, often pursuing lures several feet from the lake bottom. Spoons and minnow imitation lures, on medium or medium light ice rods rigged with 4 to 8 pound test line, are commonly used.

Ice fishing activity early in the season tends to concentrate on whatever breaks, points, and humps can be accessed safely. Jigging spoons, blade baits, and minnow imitations are often successful with large and fast jigging movements. Low light periods are far more productive than daytime because fishable depths are relatively shallow.

Trophy northern pike are pursued where submergent weeds can be found (under 10 feet). Tip-ups baited with large suckers or frozen smelt are commonly used to target the 40-plus inch fish which help make Mille Lacs well known.

When ice thickens to over a foot, anglers eagerly head to structure farther out on Mille Lacs. One area in particular to monitor is the “mud flats,” submerged and sprawling off-shore humps with flat tops (around 20-26 ft deep) common to the north half of the lake. Walleyes gather at this region of the lake for most of the winter, roaming the flats after dark and then retreating to nearby depths during the day. Perch and tullibees are also common near the deep edges of the mud flats. 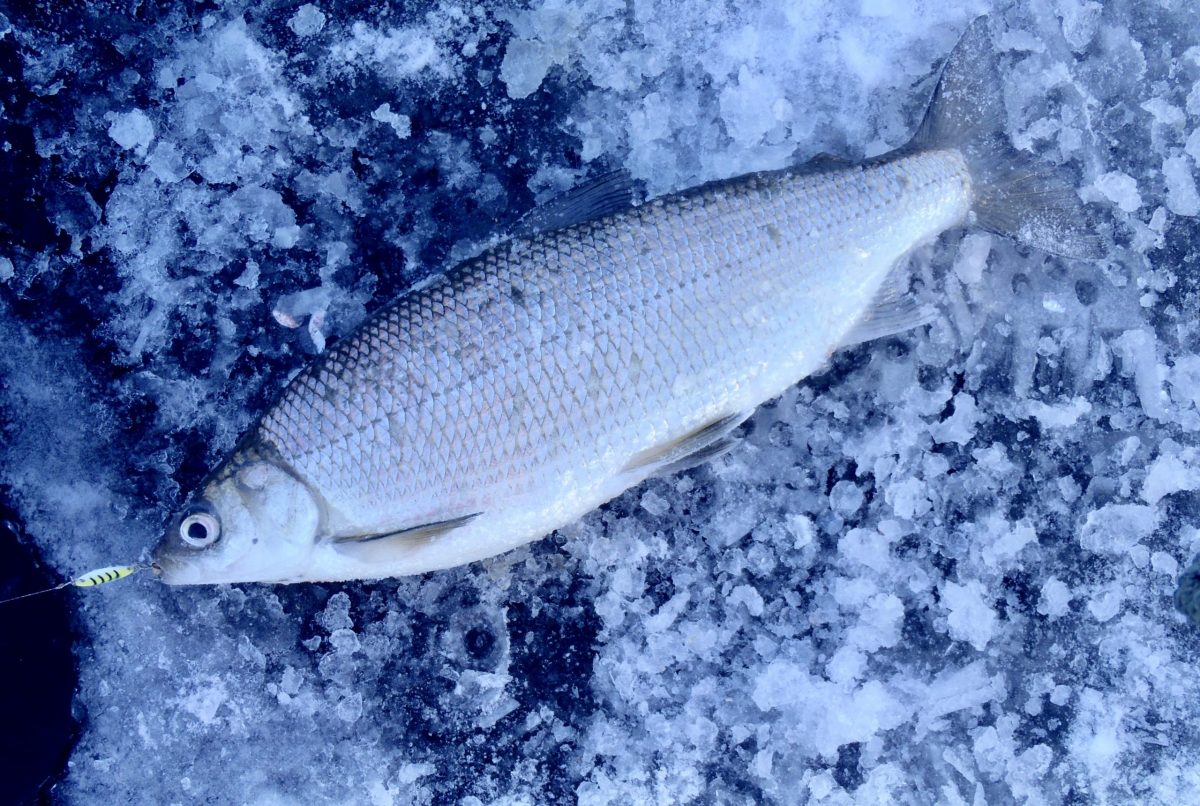 As on most lakes in the region, the bite slows on Mille Lacs when the ice thickens and dissolved oxygen levels drop. Most fish become less active and bite less eagerly. Walleyes also have a habit of staying near the lake bottom, even when actively feeding, which is a noticeable change from the early ice period. Walleye anglers often will use smaller lures to accommodate this change in behavior. Presentations like tip-ups and bobber rigs can prove more effective than jigging because a rapidly moving target can be less attractive to fish at this point in the season. Lures, in addition to being smaller in size, are often more appealing to walleyes when given smaller movement and held steady.

This time of the season can be great for catching tullibees, which remain active throughout the winter and routinely exceed a foot in length on Mille Lacs. They roam over deep mud bottoms (over 30 feet), feasting on bloodworms, zooplankton, and other invertebrates. Tullibees often stay within 2-3 feet of the lake bottom, but some schools cruise at higher depths and closer to the surface ice. Small lures that mimic typical prey are most effective, though tullibees may sometimes bite on small minnows and minnow imitations. Tungsten jigs tipped with wax worms, maggots, or scented plastics are good choices. Light or medium-light rods with straight-hanging 2-4 pound test lines are good choices for catching these light-biting fish.

After the close of the walleye season in late February, ice fishing activity on Mille Lacs drops off steeply. Resorts and businesses remove ice houses from the lake, and typically do not put much focus into maintaining ice roads with the drop in angler traffic.

However, there are still lots of fishing opportunities on Mille Lacs. The yellow perch season doesn’t close, and some local anglers swear perch angling toward the end of the winter is the best time of all. While perch may be found all over the lake, rock and gravel features in the south half of Mille Lacs are said to hold the best perch prospects. Minnow-sized baits are effective at targeting larger perch. And jigging them aggressively by pounding the bottom can help trigger bites.

There is also no closed season for tullibees, which are notoriously feisty. Decades ago they had a dedicated following among locals, who would famously congregate over a place called “the Tullibee Hole” on the warm days of late winter. The location is marked on some regional maps, and usually accessible by ice roads from one or more resorts.

Mille Lacs also has a late-closing pike season, lasting until the end of March. Anglers return to shallow weedy areas to intersect trophy specimens, which go on a feeding binge before the spawn. As during the early ice period, tip-ups with large minnows are widely used.

Getting to the south end of Lake Mille Lacs (Onamia or Isle) takes around an hour and a half from the north side of the Minneapolis metro area. Travel time from Minneapolis can take almost two hours if traveling to the north end of the lake, whether the Garrison or Malmo sections of Mille Lacs. For safety’s sake, drivers who utilize U.S. highway 169 during winter months are more likely to find a better plowed route during and immediately after a snowstorm.

The lake can be accessed from one of many state water access sites. However, large cracks develop routinely on Mille Lacs, which then often prevent safe and easy passage. Resorts and other local lake businesses create and maintain temporary roads across the ice, including bridges over the large ice cracks that can develop. Businesses managing ice roads will typically charge a nominal fee for daily or seasonal passes for these roads, allowing users to get miles across the lake in their highway vehicles. 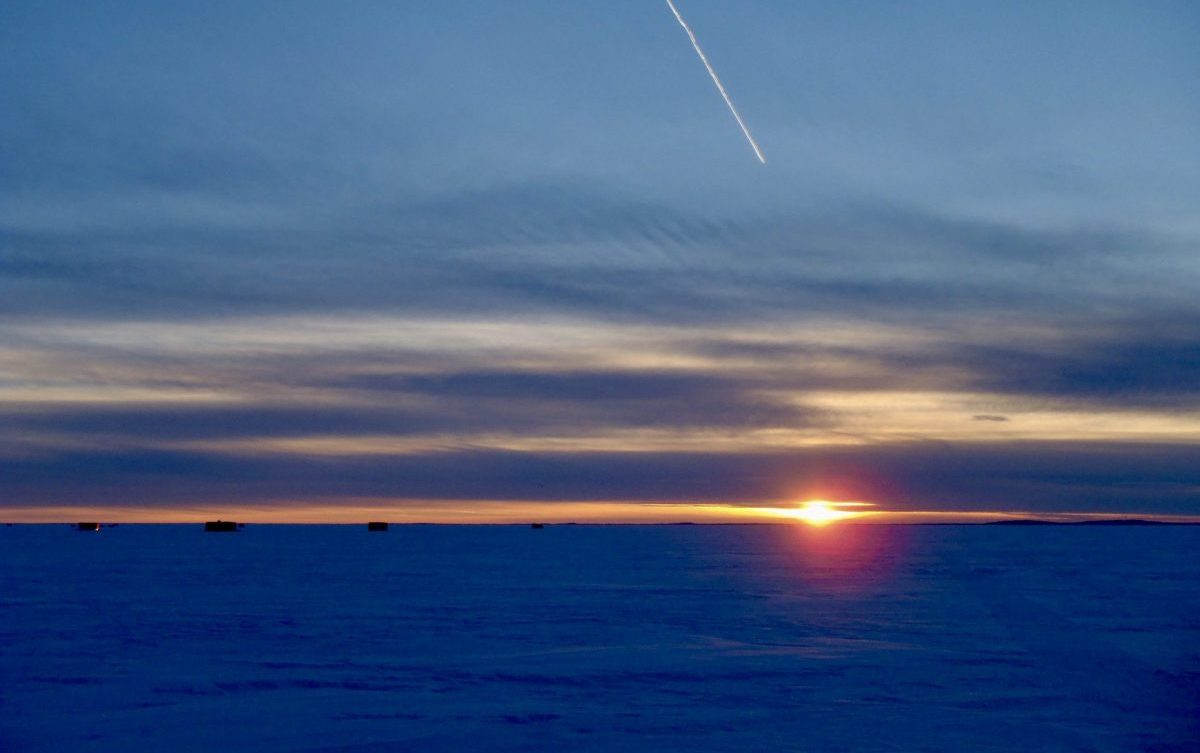 Fishing on Mille Lacs is worth the trip at nearly any point in the year. Ice fishing on the lake is a unique experience and worth the trip whether coming from near or far. Anglers of any level of skill will find plenty of great reasons for spending more time on the water, even when it’s the frozen kind.