Officially named Lake Lyndon B Johnson after the 36th president of the United States, who himself was born and raised in the Texas Hill Country, Lake LBJ is sandwiched between Inks Lake and Lake Marble Falls. The nearby towns of Marble Falls, Granite Shoals, Horseshoe Bay and Kingsland provide access to this scenic reservoir.

Lake Lyndon B Johnson covers slightly less than 6,500 surface acres. However, the lake has a winding and irregular shoreline with coves, creeks, and points covering over 200 miles of shoreline. Like most lakes in the region, Lake LBJ is relatively deep with a maximum depth of 90 feet. And like most lakes in the Hill Country Region, the waters of Lake LBJ normally remain fairly clear and with good visibility throughout the year. 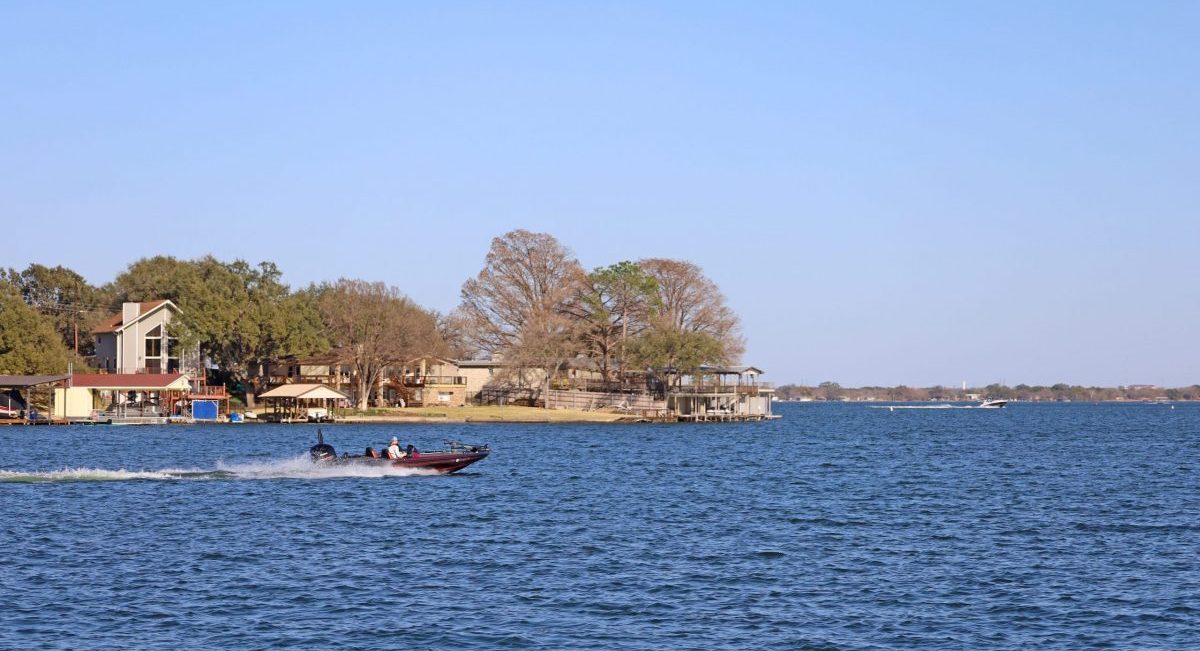 On the Water on Lake LBJ

Within the deep, clear waters of LBJ is a plentiful supply of black bass. The lake contains both largemouth and Guadalupe bass, the official state fish of Texas. The Guadalupe bass’ primary range is the rivers, streams and impoundments in the Edwards’ Plateau, which comprises a good portion of the Texas Hill Country. While the black bass doesn’t typically grow to the proportions of a largemouth – the average fish is 1 to 2 pounds – it is nonetheless a feisty fighter. The Guadalupe bass prefers moving water, so on reservoirs the Guadalupe bass are usually found in or near the rivers, creeks and tributaries flowing into the main lake.

Lake LBJ has well developed shorelines full of bulkheads, docks and boathouses. These structures are a great starting point for anglers unfamiliar with the area. There are several coves and canals lined with docks and boathouses which also offer plenty of protection on days the wind blows. Additionally, during spring, these coves and canals tend to warm faster, attracting bass as they prepare for the spawn.

The lower end of the lake (near the dam) is rocky and clear, while the upper portion of Lake LBJ has a more sandy bottom. The water on the north end of the lake is still relatively clear, but usually a bit more murky at times – more of a sandy/clear/green — compared to the south end of Lake LBJ.

Numerous creeks and drains feed into Lake Lyndon B Johnson. Sandy Creek, located on the west side of Lake LBJ, is among the largest of the creeks feeding the lake. The primary vegetation throughout LBJ and its tributaries is water willow. The nearby power plant has a hot water discharge in the Horseshoe Bay area. During the winter months, bass, as well as virtually every other species found in the lake, will be found in dense concentrations near the discharge. There are also submerged brush piles all over the lake.

When fishing around docks and vegetation, jigs and Texas-rigged worms are typically the baits of choice. Spinnerbaits are also a good choice around docks. Some of the most productive docks are in the Colorado River arm of the lake, although there are a number of docks, bulkheads and boat houses that will yield fish throughout the lake.

On the southern end of the lake, one of the most productive ways to catch bass is to toss spinnerbaits and crankbaits along rocky shorelines. During spring, residential canals, drains and small coves and creeks start warming first, attracting bass looking to spawn. Anglers can target these fish by pitching and flipping jigs or throwing spinnerbaits.

Points, drop-offs and ledges will often produce good go-to fishing locations throughout the year. Plastics, spinnerbaits, crankbaits and jerkbaits are all good choices around these features. Topwaters can catch fish along shorelines and also when they are suspended over points and ledges.

In addition to largemouth and Guadalupe bass, anglers can also target white bass, crappie, catfish and various species of sunfish. There is also the occasional striper or hybrid striper caught. Those fish are not as commonly found at Lake LBJ and are not regularly stocked in the lake. It is believed they make their way downstream from Lake Buchanan which is a well-known fishery for both stripers and hybrid stripers. Every so often a smallmouth bass, which were stocked in LBJ in the 1980s, is also caught. 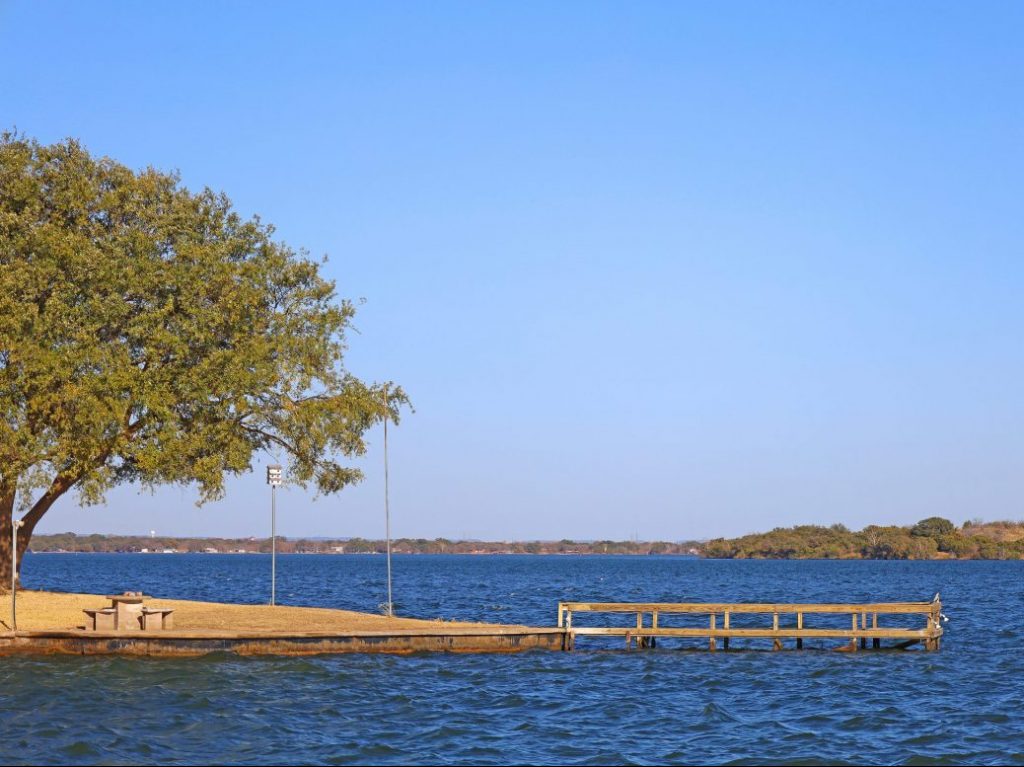 Getting to Lake LBJ

There is lots of access to Lake LBJ – especially on the eastern shore. Just outside Marble Falls, on the lower end of the lake, is LBJ Marina and the Wirtz Dam boat ramp. On the opposite end, at the very upper reaches of the lake, the Kingsland Lions Club Park in Kingsland features a ramp, shore access and ample areas to launch paddle craft. The majority of the access is in the town of Granite Shoals, between Marble Falls and Kingsland. There are numerous pocket parks throughout Granite Shoals, several of which feature boat ramps and/or kayak launches. All of these parks offer shore fishing. On the west side, in the community of Horseshoe Bay, Martin Park offers shore access and Horseshoe Bay Resort Marina rents kayaks and boats. Those staying at the resort have shore and dock access as well.

Getting to Lake LBJ is relatively simple. From Austin, take State Hwy 71 north – regardless of which side of the lake you are traveling to. If heading to the towns on the east side, turn off on US-281 North, which will lead to Marble Falls. Anglers can stay in and access Lake LBJ on the lower end from Marble Falls (as bonus, another Highland Lake, Lake Marble Falls, is in the middle of town) or head up FM 1431 to Granite Shoals (middle of lake) or Kingsland (upper end of lake). If heading to Horseshoe Bay on the west side of the lake, follow Hwy 71 north, then hang a right on W FM 2147.

Lake Lyndon B Johnson is a top fishing destination in Texas and a lake that offers a special angling experience for anglers of any level of skill and experience. From largemouth bass to Guadalupe bass to stripers, the lake offers a range of great fishing experiences and a great reason for spending more time on the water in the Hill Country region.