Lake Fork stands as one of the top fishing destinations in Texas, covering more than 27,000 acres and with a maximum depth of 70 feet. Though originally intended as a water source reservoir for the city of Dallas, Lake Fork quickly developed into being known as a top bass lake in the state. A combination of strict management, aggressive stocking, abundant habitat and a prime bait source has indeed made Lake Fork a premier big bass fishery.

Efforts to develop the lake as a trophy fishery began before the lake was even a lake. Prior to the lake being flooded in 1980, the waters behind the eventual dam location were stocked with Florida strain largemouth. Intensive stockings continued for the first several years after the water backed up behind the dam as well. Thousands of acres of timber were also left in place when the lake was flooded. The submerged timber provided good fish habitat and additional nutrients for the future fishery. Since the lake’s creation, Lake Fork has been managed as a trophy fishery, with restrictions still on keeping largemouth bass between 16- and 24-inches to help ensure plenty of big bass inhabit the lake. 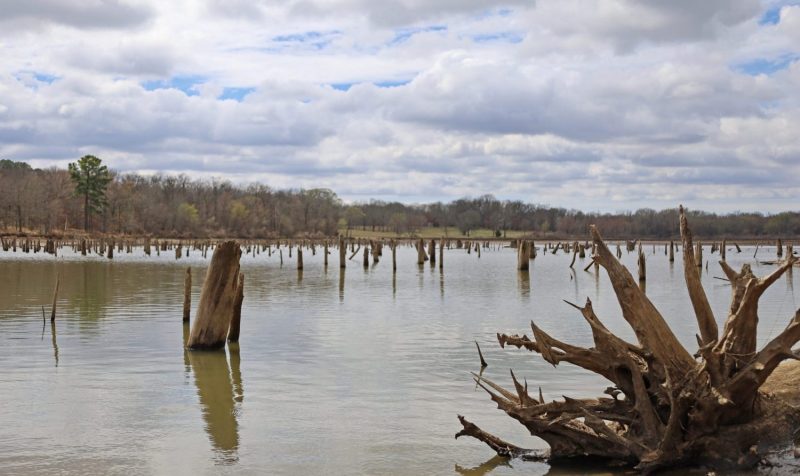 Soon after its creation, Lake Fork quickly became a big bass sensation, producing a disproportionate share of Texas biggest largemouth bass. Just six years after the lake was formed, Mark Stevenson caught the then state record 17.67 pound bass. The lake record was subsequently eclipsed by the current state record fish, which tipped the scales at 18.18 pounds. Well over half of the top 50 heaviest largemouth bass caught in Texas, including the top 6 place holders on the list, have come from Lake Fork. And the lake is still producing plenty of big bass. Bassmaster Magazine named Lake Fork the top bass lake in the country in 2021.

Located about 60 miles east of Dallas, the lake straddles two different regions of the Lone Star State – the Prairies and Lakes region towards Dallas and the Piney Woods Region towards Longview. As a result, the western shore is sloping and not as densely forested as the eastern shore. But, nonetheless, there are plenty of trees along the entire shoreline, as well as in the lake itself.

Lake Fork has a very distinctive ‘V’-shape as a result of the dam being placed at the confluence of Lake Fork Creek and Big Caney Creek. Little Birch Creek and Little Caney Creek also feed into the lake. Between these and numerous other, smaller creeks and drains, Fork has an irregular shoreline and is covered with a wide range of coves, bays and branches of various sizes, resulting in 315 miles of fishable shoreline.

Much of the shoreline is lined with hydrilla, flooded brush and/or standing timber. The great amount of flooded timber creates a significant hazard for boaters unfamiliar with the lake. However, the lake has several marked navigational lanes for safe passage. Regardless, boaters are wise to invest in an electronic map or chip for their GPS unit before attempting to navigate around Lake Fork. DIY anglers wanting to play it safe will find plenty of open water on the lower end of the lake, near the dam. However, most of the biggest bass comes from some of the densest cover accessible by watercraft.

While timber is the most obvious and dominant feature on Lake Fork, there are several other types of structure that hold fish and are worth investigating. Half a dozen bridges cross the lake at various locations. There is also a multitude of boathouses, docks and laydowns. Shell pads and clay chunks also attract big bass on Fork, as do points and ledges. Additionally, the Texas Parks and Wildlife Department in conjunction with the Lake Fork Sportsman’s Association has sunk artificial structures throughout the lake (GPS coordinates are available on the TPWD website).

Bait selection for Lake Fork is similar to baits used on other popular Texas lakes. Spinnerbaits, lipless cranks, Texas-rigged worms and lizards, crankbaits, jerkbaits, topwater plugs and artificial frogs will just about cover most fishing needs on Lake Fork. However, big bass on Lake Fork are often attracted to jigging spoons and flutter spoons, which aren’t commonly used on many Texas lakes. 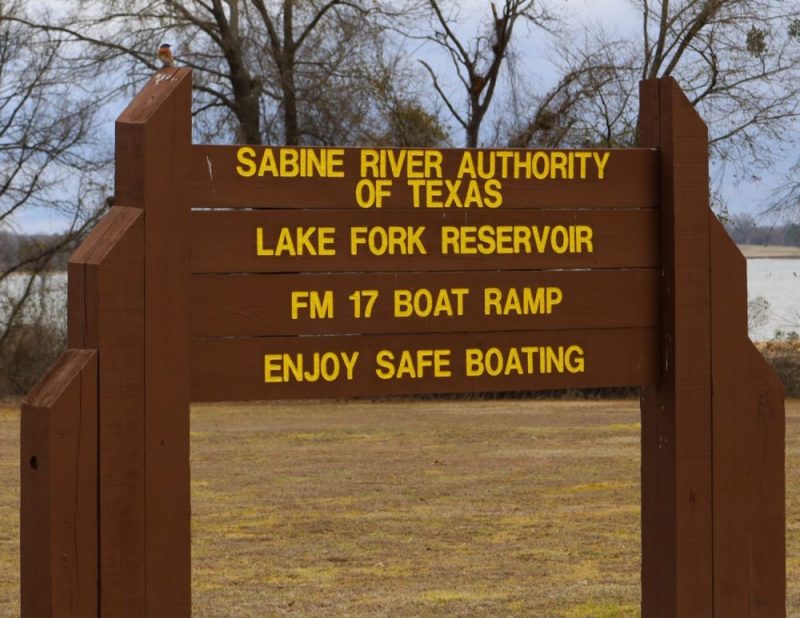 Accessing the lake is simple enough. There are a couple dozen ramps scattered throughout the lakes, some of which are maintained by well known establishments, including Axton’s Bass City, Lake Fork Marina, Minnow Bucket Marina and the oldest marina on the lake, Oak Ridge Marina. Private ramps generally require a fee, but there are numerous public ramps with no fee. There is also a range of shoreline access and numerous fishing piers – both public and private.

Bass obviously get top billing at Lake Fork, drawing anglers from around the world. However, there are other species to be found. The lake is an excellent place to fish for crappie. It is also home to some impressively large bluegill and catfish. Lake Fork also has an established white bass population as well.

Visiting anglers certainly don’t need to worry about finding a place to stay when they come to fish Lake Fork. There are many different lodges and campgrounds to accommodate anglers with different budgets. Additionally, there are motel, hotel, B&B and lodge accommodations available in the nearby towns of Quitman, Mineola and Emory. Whether Lake Fork is fished as part of a day trip or as part of an extended visit to the region, the lake is a destination well worth the time spent at one of Texas’ top bass lakes.