Located just north of Houston, Lake Conroe’s 20,000-plus surface acres of water is surrounded by more than 150 miles of shoreline. This massive body of water on the West Fork of the San Jacinto River is appropriately Texas-sized and features a wide variety of manmade and natural fish attracting structure and habitats. Despite its close proximity to Houston, Texas’ largest city, Conroe has a reputation as an outstanding fishery for largemouth bass, including the 15.93 pound lake record fish. Not only does the lake produce trophy bass, it also yields impressive specimens of other species.

Fishing Lake Conroe often feels like two lakes in one. Nearly the entire shoreline of the lake below the FM 1097 bridge is covered with shoreside development – houses, hotels, condos, restaurants, hotels, resorts and marinas. Above the bridge that cuts the lake virtually in half, there is much less residential and commercial development. A large part of the northern portion of the lake is surrounded by the Sam Houston National Forest where there is no shoreside development. Depending on which end of the lake a line is cast, an angler may be fishing amid busy shoreline or in quiet coves among mixed pine-hardwood forestland. Despite the contrast in views, both portions of the lake produce impressive catches of largemouth bass. 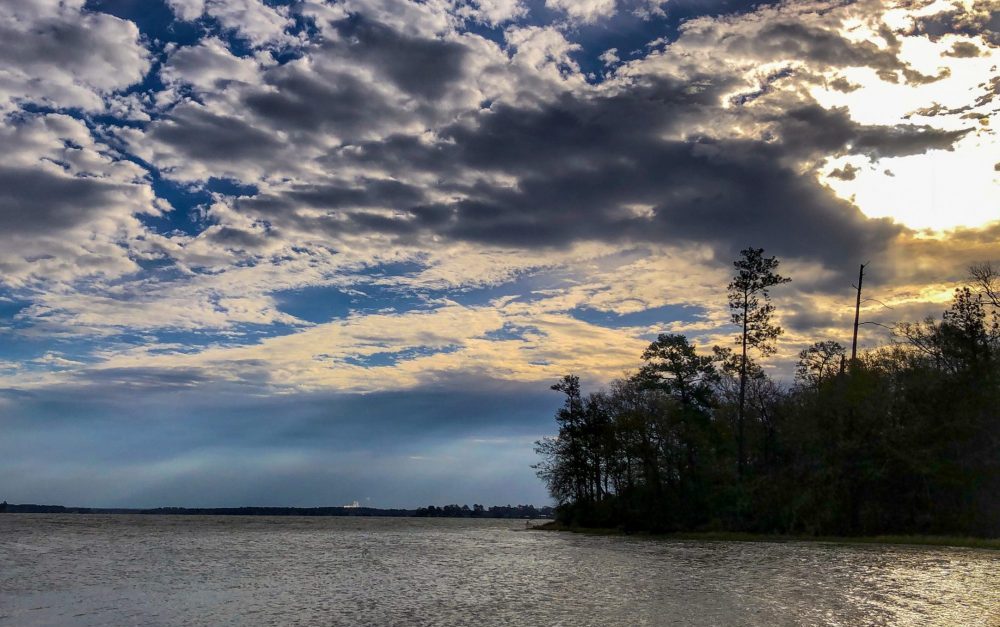 On the Water on Lake Conroe

Conroe is diverse in the type of fishing structure to be found above and below the waterline. Bulkheads and docks are the primary structure on the lower portion of the lake. While the northern section of lake above the FM 1097 bridge has no shoreside development, it has plenty of natural structure, including stretches of flooded timber. The lake was manmade when the waters were impounded in 1973. In the half century since then, much of the flooded forest land has decomposed underwater. This section is more challenging as a hazard for boaters and anglers prone to losing lures as there are the parts of flooded forest where the tops of standing timber have rotted away and are no longer visible above the surface at normal water levels.

Throughout the lake, anglers can find bass hanging around stands of aquatic grass, lily pads and hydrilla. Conroe has a somewhat challenging history with aquatic vegetation. It had once been overrun with hydrilla – with over 50 percent of the lake covered in the early 1980s, making lake access and navigation difficult. Grass carp were introduced to control the spread of hydrilla with disastrous results when the fish species indiscriminately ate through virtually all the vegetation from the lake, removing vital amounts of habitat for bass and panfish. In the 90s, vegetation was reintroduced to the lake – as were grass carp, albeit in a more controlled manner. Today, aquatic vegetation is once again present in substantial quantities to help act as viable fish habitat.

Lake Conroe shoreline is filled with distinct coves and points, many of which are productive areas to target largemouth bass on the lake. Additionally, the Texas Parks and Wildlife Department and the San Jacinto River Authority partnered with the Seven Coves Bass Club to sink “reefs” throughout the lake and provide additional structure for fish. Coordinates for these PVC structures can be found here.

When it comes to fishing, a simple selection of basic bass baits, including spinnerbaits, Texas-rigged soft-plastics, jigs, crankbaits and a topwater plug or two will take care of most needs on Lake Conroe. Watermelon, green pumpkinseed, purple and black colored lures are the most popular colors of soft-plastic artificial creatures and worms. Black/blue and natural craw are effective colors to use when tossing jigs. White and chartreuse/white are top colors for spinnerbaits. Chartreuse/blue, firetiger and chrome/blue are good choices in crankbaits, while chrome/blue is a top choice local color for topwater plugs. Watermelon or black colored artificial frogs are good surface choices as well.

When to go to Lake Conroe

Spring through fall is typically the best time to go bass fishing on Lake Conroe, when Dl, fish will often be found lurking in the shallows near shorelines. Working topwater lures, spinnerbaits, creature-baits, jigs or shallow cranks along shorelines and docks is a common method to find bass of all sizes. Fishing around the docks – both on the main lake and in residential canals – can be one of the most consistent ways to find bass on Lake Conroe.

During summer, bass will swim deeper in the lake for much of the morning and afternoon to find cooler water in the hot weather. But anglers can still spend some time along shorelines and fishing shallow structures during the early and late portions of the day. When the bass are lurking in the shallows at this time of year, spinnerbaits, topwaters and jigs are good ways to attract hungry bass. During the balance of the day, when fish typically move to cooler waters off the many points and to offshore structures then deep-running crank baits, slow-rolled spinnerbaits and Texas-rigged plastics often work well for finding fish.

Grass beds on Lake Conroe can produce fish throughout the day. Early in the morning, fish will be between the shoreline and grass or over the top of submerged vegetation, where they can be taken on topwaters and spinnerbaits. Later in the day fish can be caught hanging on the outside edges of the grass or by punching jigs through the grass to the fish beneath. Rip-rap shorelines are also steady producers for bass during the summer months.

Getting on the Water

Texas Parks & Wildlife operates a public ramp at the end of FM 830, just south of FM 1097 bridge. Additionally, several privately operated ramps are found throughout the lake including Pier 105, Stow-a-Way Marina, April Plaza Marina and Lakeview Marina – all of which are open to the public but require a fee. Lake Conroe Park in the southwest corner of the lake, not far from the dam, offers fishing piers and shore access. Kayaks and canoes can also be launched from the shore within the park.

Getting to Lake Conroe from Houston is straightforward and an easy drive. After driving north on I45 for a little more than an hour, the first of multiple options to access the lake (State Hwy 105) can be found. Continuing north, anglers have more options for lake access by following League Line Road, FM 830, FM 1097, Calvary Road or FM 1375. The closeness and simplicity in getting there makes Lake Conroe an ideal angling destination for anyone living in or traveling to Houston.